Redemption Song, Wyclef Jean, from America: A Tribute To Heroes (2001).

One of Bob Marley's finest songs, covered here masterfully by Wyckef Jean. Immediately after the 9/11 bombings, the "Tribute To Heroes" charity show aired, and this song was Wyclef's contribution. He reworks it brilliantly, letting the song serve as both poignant lament and then, nearing to the end, a song of hope and triumph of the spirit over evil. Johnny Cash and Joe Strummer both tackled this song as well around 2002, and I love all three versions. But this one really does pack an emotional punch. It was definitely one of the wisest song picks for the 9/11 tribute.
Posted by Chance at 7:37 PM No comments:

My heart's in the basement, my weekend's at an all time low

For lunch I had pizza, carrots, and passive-aggressive false solicitousness. One of my team was absent, so Ms. DeWolf filled in. Now I have been bending over backward to be nice to her since school started, or at the very least to be trying to thaw the coldness that has sprung up. I texted her saying that I was willing to forget her serious overstepping of the first day, when she took L3 out of my room; and I gave her a CD that I thought she'd like that I had bought a year or so ago and didn't think much of.

But, sitting with Ms. Blah and me at lunch, she heavily laid on pinched, critical commentary directed at me, and not in the half-jokey way you might give a co-worker a backhanded compliment. No, it was clear nastiness, to the point where I, typically very reserved and easygoing at work when it comes to personality clashes, said to her, "Wow, you're just kind of a horrible person, aren't you?" and then tuned her out the rest of the lunch period. Probably slightly shocked Ms. Blah, but you know, what the hell.

It didn't make my day suck, but it was definitely an unpleasant moment in an otherwise fine day.
Posted by Chance at 7:01 PM No comments:

S3, when the class timer went off: "My goodness, Mr. Chance, that beeping scared the tapioca pudding out of me!" (Cute, but possibly picked up from a TV show?)

J2, on being asked to name something that starts with A: "Ares. He's the Greek God of war." (Impressive!)

J1, being shown the photos in my digital camera: "How can a camera take pictures when it doesn't have eyes?" (Uh... good question. Magic?)

G2, walking down the hall with me, at the head of the line, apropos of nothing, cheerily: "My daddy is much fatter than you!" (What the hell? I'm not fat!)
Posted by Chance at 8:23 PM No comments:

People who rail against universal health care are monsters. This did not have to happen.

What the Republicans are for, and how they have been winning the language game for years: anyone who has been paying any attention knows this already, but this guy says it so well.

Rick Perry is a hypocritical bastard who takes all the credit for things the federal government and its "evil" dollars helped bring about. He also likes to pretend he hates government, except when he wants Big Brother to tell doctors what to say or rent him a mansion. Hey, and you know those wildfires Texas has been having? He cut fire fighting budgets this year, and now wants the big bad evil Fed to come help us!

(I'm thinking Perry's going to be the guy I'll have to keep an eye on for the 2012 version of my Fact Sheet.) 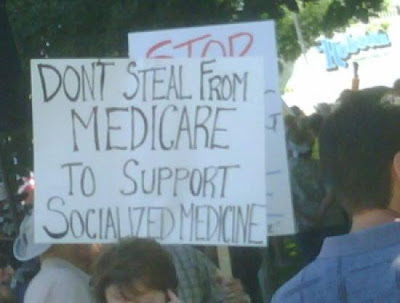 They're all shouting something at us, waving and pointing

Man, it's so loud in here. The highest stress part of my workday has got to be carpool. When the parents don't display their numbers or for some other reason they slip by the system, Ms. Helen calls the kids out via the intercom. And Ms. Helen, while easy on the eyes, has the loudest, screechiest, most nasal, diamond-bit-drill of a voice you have ever heard. Her impatient, hectoring shrieking when the kids miss their cues to go to the cars makes everyone cringe, and it makes me very anxious. And that stress gets transferred from me to the kids, as I try in the chaos to get them out the door with all they should be carrying and which most of them would forget every day if not reminded.

I think every carpool, like each cigarette, takes eleven minutes off my life. Actually I feel like smoking to calm down afterwards. I don't, though. I go for alcohol.
Posted by Chance at 8:20 PM No comments:

Got to lose this skin I'm imprisoned in

Today was not only a day off from work, but the first day in many, many weeks that the temperature has been below 100 degrees all day long. After scorching triple digits and oppressive 90 degree nights, a cold front pushed the mercury down to a positively balmy 85. So naturally I spent a lot of time outside, walking and laying on my beach chair in my yard reading.

Of course, I'm half-Briton, half red-headed Scot, and my porcelain-white skin turned a cheery but slightly painful bright red. Whoops! Too much of a good thing.

Later in the evening I went out with Friar, Courtney, C, and Auric's drummer to go see three great local bands. The Friar's music label, always weak from lack of exposure, has pretty much died of file sharing, so he and Drummer are starting up a management business. That, and he's a lawyer and family man. What a dynamo. Me, I'm too tired to untie my shoes when I get home from work.
Posted by Chance at 10:51 PM 1 comment:

The twelfth winner of the Newbery was, surprise surprise, set in a country that is not America! It was Young Fu Of the Upper Yangtze, by Elizabeth Foreman Lewis.

It tells of the coming of age of the titular Fu, a fourteen-year-old boy from the countryside who in the 1920s arrives in the vast city of Chungking (modern Chongqing) with his widowed mother. Apprenticed to Tang, a consummate coppersmith, Fu learns to temper his naïve curiosity, swallow his fears, face the bizarre novelty of foreign devils and gasoline-powered cars, and master his pride. Episode by episode, Fu grows wiser from his mistakes, and is a very likeable, sympathetic hero who risks his life for others on two occasions.

This is an exciting and engaging young adult novel. Like many books of this era, it reflects an era of more exacting learning in schools. Some of the vocabulary is rather abstruse – badinage, enmity, stinting, auspicious, for just a few random examples – and the writing is sometimes tortuous ("Not one man in all China but would make the journey"). But it’s rewarding, and a book-loving kid could easily get plunged into this almost alien world that was once very real. The most interesting thing about the book, indeed, is seeing the differences and similarities between Fu’s world and thought and those of us today. There are eternal truths about humans, and Fu shows bravery and kindness and pride and stupidity, all of which readers can relate to. But then there's the traditional Chinese way of life, with its reverence for age and unquestioning obedience of mothers, fear of evil and mischievous spirits, fatalistic resignation to oppression, foot-binding, coolies, poverty, opium, sedan chairs, draconian punishments, and so on. At a few decades past the turn of the century, many Chinese still lived the way their ancestors did thousands of years previously, and knew just as little about the outside world. Fu, for example, cannot imagine the ocean across which the foreigners live, assuming it must be smaller than the mighty Yangtze. (Actually, judging from some of the travel literature about China I’ve read, such as the superb Iron & Silk, some Chinese in the countryside even ten years ago knew very little about geography, space, and other fields irrelevant to their lives.) Lewis’ wonderfully written book (her first!) is a terrific window for young adults into history and the study of other cultures.

Recommended for children: Yes, for older children, who have a love of reading and fearlessness about new vocabulary and concepts.

Recommended for adults: Yes! Everyone should delve into other cultures, and this is a well-written story.
Posted by Chance at 8:33 PM No comments:

One of the lesser-known gems from the landmark album. Although a casual listen leaves many thinking that this is about a blow job, the song actually castigates men who have unprotected sex and father babies "when she forgot that thing she had to swallow" (the Pill). It reminds men that there are other things you can do in bed besides being "free with your seed" and thus losing the energy to continue pleasing a woman. For example, "there is a place you can kiss." Such a man, who has self-control and consideration, "can make a lover in a thousand gos." That's right! He's talkin' cunnilingus, baby!

...Wait a minute! This song isn't about the oppressive class system! Sell-outs!
Posted by Chance at 5:18 PM No comments:

Make no mistakes, I'm what you make me

So, things are going about as usual with me, which is to say Happiness Eludes, though I'm always cognizant of my good fortune in being an educated American with a nice job.

The problem with having so much of my identity tied up with my job, of course, is that when things don't go well, I have no other pillar to rely on. I, Chance, am not father, nor husband, nor long-term lover.

Hell, I'm not even a zealous hobbyist. Those aspects of life don't exist for me; after a setback, all I have is time to reflect on the success or failure of my professional day.

It doesn't even have to be anything specific, just a general sense of malaise that the day could have gone better. That can blacken the whole rest of my evening. Well, that's what happens when you're a depressive sad sack. 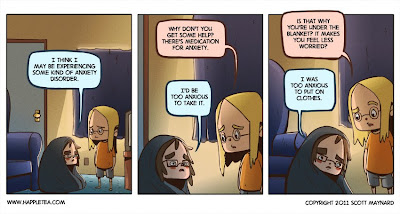 Posted by Chance at 9:31 PM No comments:

Wake me when September ends

At work, the new kids are coalescing into a class pretty nicely. L3 has stopped being so fearful and depressed; G2 is doing fine and her mother seems happy. We're coming out of the introductory stage where the kids are learning to interact and socialize in their new environment, and beginning to do actual literacy and math lessons. Some of the kids are not used to having to do a certain task, such as writing a sentence, and one or two get a touch weepy at the end of the day.

But that's par for the course; they're learning that putting a bit of effort into a task they're not necessarily enthralled by won't kill them, and they'll be proud of how much they're learning in no time. In all, they're a great group, quick to clean up after themselves and generally helpful to one another. They seem more responsible as well. They're not quite as quick with the addition facts and letter sounds as last year's class, but that can come later. Being good listeners and developing good work skills are the roots on which those other branches of knowledge will come later.

Or something, you know. I just wing it every day.
Posted by Chance at 10:34 PM No comments: