The Iridescent Tourney, Day the Firste

[As I mentioned in an early November post, back before my big breakup, I maintained another, well-received humorous blog called the Contest Of Champions. That blog is now defunct. Instead of wallowing in the misery of my current life situation (see the previous posts) I will reproduce here COC's last gasp, an abruptly aborted series that was started in April of 2005. Enjoy!]

Welcome to day one of the Iridescent Tourney --- a series of COC fights suggested by that swell fellow H at the always entertaining Comic Treadmill.

Here's how this will work, at least in theory. I made a list of thirty heroes and villains with colors in their names. I tried to avoid characters too obscure. I won't reveal the list ahead of time, because I don't want to spoil any surprises. However, I will note that I could find no characters whatsoever from any company with the words "orange" or "brown" in their name. I know there must be at least one or two, but I'm unaware of them.

Today's battle will be between two chromatic characters picked at random, using the COC's Super Secret Random Hero Generator (for real this time). No, you still can't see it. In the next installment, today's victor will face off the next randomly-chosen entrant in another thrilling hue-themed theomachy.

Not all the characters on the list will enter the Tourney (think of them as bench-warmers). The Tourney will end when a clear winner is found, someone who could likely beat any potential entrant (and I'm pretty sure I already know who that will be, but who can say what surprises are in store).

In the green corner: Kyle Rayner, proud possessor of the most powerful weapon in the universe. (Given Hal Jordan's yellow weakness, against this guy you better believe the GL in question is Kyle ["Some Fear"] Rayner. Yeah, baby!)

In the... uh... gay corner? We see Roy Bivolo (I take it back about Rokk Krinn), one of the silliest villains in DC's extremely long history of extremely silly villains. His souped-up goggles have a variety of effects, including emotion manipulation, lasers, and the projection of big long floating rainbow sidewalks. (He whaa??)

I'm not going to try to rag on this guy --- the link I provided does a better job of that than I could --- but I will just say this. Don't these comic-book villains ever stop to think that the amazing whatsizzes they invent --- flying boots, laser rods, paste guns, mood-altering rays --- could make them extremely wealthy and respected, if they'd only put them on the market?? Or you know, they could sell them to the U.S. government. No pointless fights with holier-than-thou guys in tights, no jail time, nothing but fat envelopes stuffed with wads of unmarked bills appearing in their mailbox every month. Well, that 's what happens when you're selfish and short-sighted.

Anyway. Judging from this guy's previous track record, the fight would go something like this:

RR: "What?? Impossible! It has no effect! Well, then a yellow beam should--- What?? It can't be! Nothing happened!"

Kyle cocks his head and blinks once or twice, staring at the Raider as if to assure himself that this apparent lunatic, standing on a floating rainbow, is actually trying to harm him.

RR: "How about a nice, lethargy-inducing white ray??"

He blasts GL with the color-draining beam.

With a thought, Kyle has a couple of big green flying monkeys swoop over and (gingerly, because we don't want to hurt the poor deluded loon) pluck the goggles off of Bivolo's head.

The now-powerless Raider falls toward the ground as his rainbow platform vanishes under his feet in an eyeblink, but Kyle catches him in a nice soft green pillow. He places the Raider in a nice comfy green padded room, in a nice snug green straitjacket. Green reproductions of calming oil prints are on the walls. A green stereo plays calming music --- perhaps some of Brahms' more delicate pieces.

Kyle puts a big green gag on the Raider's mouth. 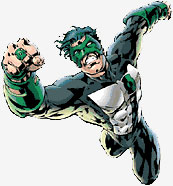