Normally, I don't blog politics, because (1) people's hatred of truth and facts makes me sad and angry, and (2) so many people, even non-professionals like Dave, do it so much better than me. But I've been kicking around the idea of an election fact sheet for a while, so here it is.

By the by, I note that Obama's lead in the polls has been shrinking. Is this racism in Democrats kicking in as the reality of a black president looms closer? Or are people swallowing McCain's continual hammering of Obama (and the facts)?

Speaking of which: see the intriguing portrait of the candidate as a pile of words, via the Boston Globe. Someone can't stop thinking about his opponent!

But enough of that. Below, a collection of refutations and facts on the nominees that the mainstream media doesn't seem to want to talk about. This page may be edited several times before the election.

Fact: Obama is not and never has been a Muslim.

Fact: Obama was not educated in a madrassa.

Fact: Obama does not take contributions from Arab or any other non-US source.

Fact: Obama will and does recite the pledge of allegiance.

Fact: Obama is a U.S. citizen. Seriously, lies about his citizenship are really scraping the barrel.

(I love that "elitist" word these country-club Republican millionaires love to toss around. Actually, of course, Republicans, not Democrats, are more likely to be elitists who do not care about everyday Americans.)

Fact: Phil Gramm, McCain’s top economic advisor at the time, a multi-millionaire who has never stopped suckling on the government teat, said that Americans who are having economic troubles "whine" and "complain."

Fact: Dick Cheney, the vice president of the , who ought to be the representative of the American people, asked "so?" when informed that the will of the people was not his own. How elitist!

Fact: for all Americans earning less than $277,000, taxes will go down under Obama's plan. Americans who make average, working class wages – not the wages of the elitist super-rich – will pay less taxes under Obama.

Fact: under a Republican president and his long-time Washington millionaire insiders, the dollar has slipped to a new low and oil to a new high. Jobs are scarce. Meanwhile, oil companies are making the biggest profits in the history of the world. That's as elitist as it gets.

Fact: McCain is so elitist and removed from the everyday concerns of the American people he didn't know in June 2008 how much gas cost.

Fact: McCain is so wealthy as to not understand anything about how the average hard working American lives. Note, for example, his $520 shoes, his many houses, etc. 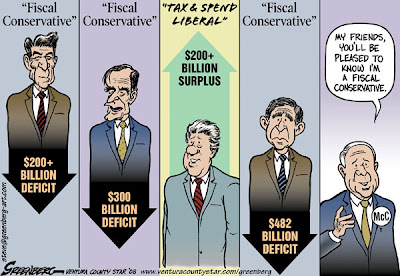 Fact: it is Republicans, not Democrats, who are big government, tax-and-spend porkers who waste hard-working Americans' tax dollars.

Fact: the Bush administration has squandered our great military on (lying to congress to do so) instead of finding the terrorist groups actually behind 9/11. In doing so, it has severely curtailed civil liberties, resulting in the most obtrusive government in American history. McCain approves of this.

http://www.factcheck.org/elections-2008/more_tax_deceptions.htmlFact: Most of McCain's financial backers are lobbyists. 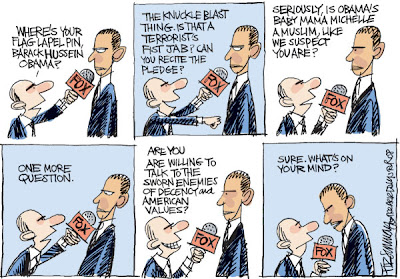 Fact: the media is much harsher on Obama than it is on McCain, often glossing over McCain's flaws (see next section).

(Could it be they don't spend as much air time on McCain because [1] he's uninteresting and [2] to do so, they'd have to spotlight his flaws?)

(Personally, I think that a candidate's sexual peccadilloes are between him and his family, and far less important than other more impeachable offenses, but, you know, Republicans claim to think it's a big deal, at least when a Democrat does it. So sexual values are discussed here as well. Hey, if John Edwards' affair is news, why not McCain's?)

Fact: McCain has links to the Keating Five and falsified his tax returns.

Fact: McCain left his first wife, Carol, after she was disfigured in a car crash, to marry a much younger heiress.

Fact: the second marriage was just weeks after the divorce; he was seeing Cindy while still married to Carol. This fact was glossed over in his memoirs.

Fact: McCain admits to having affairs while married to Carol.

Fact: The FCC rebuked McCain for trying to use influence for the woman he had an affair with, Vicki Iseman. So, not only did he commit adultery, his affair influenced how he used political power.

Fact: Cindy McCain became addicted to prescription drugs and stole from her employer to get them.

Fact: Those close enough to see McCain away from the cameras say he makes racist jokes and uses racist language in his everyday speech.

Fact: McCain has flip-flopped on almost every core issue since he began his run for president.

Fact: The McCains adopted a baby girl from Bangladesh. Terrific! But why did they concoct a story that Mother Teresa herself implored them to do it? Is it because the truth is never exciting enough for an inveterate liar?


* On experience and fitness

Fact: McCain is computer illiterate and graduated 894th out of 899 at his naval academy.

Fact: McCain is consistently ill-informed on world issues. Is this a man qualified to wage war and help build a global economy?

Fact: McCain makes a lot of gaffes when talking about world affairs.

Fact: While McCain makes gaffes, the rest of the world has proven more than willing to work with Obama.

Fact: if you're all up in arms about Michelle Obama's "proud of America" comment, note that McCain said he did not love America until becoming a POW.

Fact: if you're all up in arms about Obama's pastor Wright, you ought to be equally concerned about McCain’s former buddy and endorser John Hagee, who called the Catholic church "the great whore" and makes some pretty radical comments about Hitler and the Jews.

Fact: if you think McCain has a point in deriding Obama for his 'celebrity factor," you should know that McCain's own website described him as being a "political celebrity." And before his presidential campaign, he accepted offers to be in television and movies.

Hello, I do not agree with the previous commentator - not so simple