Twice as cloudy as I'd been the night before

...And I went in seeking clarity.

I went to the Hangout Thursday night with MA and Friar, despite the fact that I have to be on the road before 7:00 a.m. these days. I figured, hell, if I'm gonna be jacked up, anxious and awake until all hours, I may as well be awake at a bar with friends, right?

I did the barfly thing again tonight. The place was a bit maudlin, with lots of people hugging and some crying because of the musician's death. His bandmates were there, a couple not looking too good. I ran into Mr. Hangout, Skullfuck, Paris, Gunner, AL, and a lot of the other usual suspects. Played video golf with Friar and his boss. Stood around vaguely uncomfortably while MA did her public affection thing on me. (She seems to enjoy acting as if she's my girlfriend when we're in public, with lots of proximity and touching. Since she's gorgeous, I'm not complaining, but when I was emotionally weaker last year, that kind of thing messed my mind up a bit. Now, it's just kind of strange.)

I texted EPALG and got a rather indifferent reception. I know we're not dating; I just wanted to issue a no-pressure invitation to another (new) friend to drink and be merry with a bunch of cool people, but somehow it came off (in retrospect) as kind of clingy and weird. No surprise there if you've read any of my misadventures. Esto tibi ipsi fidelis, I always say. 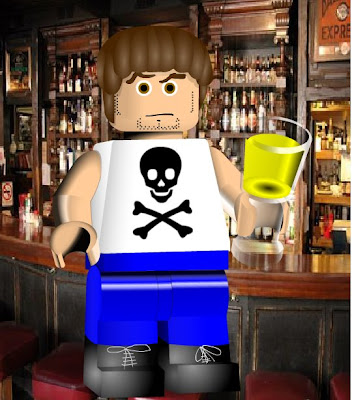 Accurate rendition of me at the Hangout
Posted by Chance at 3:46 PM