I've always been interested in flags (though I'd probably do pretty poorly in a Flag Bee, if such a thing existed). Hence:

Look! It's got a red dragon on it! How can it not be cool? The flag dates back to the '50s, but the red dragon has been a Welsh symbol since Roman times. This is simply the coolest flag in history. 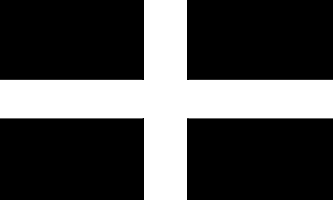 I like the stark simplicity of it. Known as Saint Piran's flag, it is said to represent molten tin and black ore. The tin trade was big in Roman times. I've visited my uncle in Cornwall a few times. I don't think you've really experienced southern England until you've walked its beautiful, haunting moors.

This flag was adopted in 1966. The broken trident is supposed to represent the breaking of Barbados' colonial ties. me, I just like tridents, I guess. Also, black on yellow is a powerful color combination.

"My pockets so empty I can feel my testicles / 'Cause I spent all my money on some plastic African necklaces / And I still don't know what the colors mean / Red, black and green." Black is the Kenyan people, red is the blood spilled in the fight for independence, and green represents the countryside. And in keeping with the proud Maasai tradition, two spears and shield are front and center.

At the risk of giving "aid and comfort to the enemy," which seems to be a rather common theme these days, Iran's flag is pretty well-designed. You've got a red tulip-sword in the middle and some beautiful stylized Arabic writing along the edges. This article contains in-depth and probably accurate explications of the details, and has a larger image as well.

Runners-up: Prince Edward Island, the Gadsden flag, Sri Lanka, Bhutan (the other dragon flag; still not as good as Wales tho).

Before they changed it to a rather bland thing with a sun on it, Rwanda had The World's Dumbest Flag. Hey, Rwanda! Someone vandalized your flag! they put a big stupid black "R" in the middle! ...What? That's supposed to be there? It helps you remember how to spell Rwanda? Oh. well, I guess it's hard to put your attention to designing flags when you're busy planning the genocide of your friends and neighbors, eh?

The Isle of Man

Proving that not every British people have a cool flag, the Isle of Man's flag is one of those designs that's so stupid it makes that 180 degree into cool, but then because it's stupid keeps going and makes it 360 degrees back to stupid again. Attention Manxmen: your flag has three armored legs attached at the groin area and running! Are you aware of this?

Now, see, a flag is your chance to put anything you want on there for the whole world to see, Libya. I know you love the Islam (green apparently represents Islam somehow), but look at all the other Muslim countries. They have Arabic writing and pillars and crescents and stars and, oh, all sorts of things on their flags. Don't you want to be just a little bit creative, too, Libya? No? Fine. Your flag is boring.

In a category by itself is the flag of Cataño, Puerto Rico (a design which, while startlingly original, may induce motion sickness).
Posted by Chance at 11:52 AM

The symbol on Isle of Man Flag is called a trinacria, which means "3 points". The trinacria is also found on the Flag of Sicily. The shape of the three legs, in the case of the Sicilian flag, is supposed to resemble the island itself.

I'm not sure what the trinacria symbolizes on the Isle of Man flag, but that would be interesting to find out.

I did not know what that's called; thanks a lot! I love it when people tell me things I was utterly unaware of.

I knew about Sicily's flag, but for whatever reason, i think it's cool, while Man's flag is decidedly not. It's probably the face and the shapeliness of Sicily's legs.

The face is Medusa's.

Yes, it is a very symbol and a very cool flag.

Ukraine's flag doesn't clash, the two colors go will together and give a perfect amount of contrast, unlike Barbados where it's a dark blue next to yellow.