It's April! This being the cruellest month, let's have a couple of fictional characters pummel the snot out of one another for cheap larfs.

In the red corner is Goliath, a.k.a. nothin', 'cause that's his real and only name. He's big, he's bad, he's 3000 years old --- the Original original, the Biblical Goliath. Oh, sure, there are lots of Goliaths from comics and cartoons I could have featured in this match-up, but I went with the Fearsome Philistine because he's the baddest of all. Why, you ask? Simple. He's... uh... a warrior... Oh, all right, I only did this to satisfy a whim I had to find out how big Goliath is in modern terms, okay? Are you happy now?

So then, how big is Goliath? I'm glad you asked. Let's turn to the Bible. Everyone got your KJVs out? Good. Now, turn to Goliath's first appearance, in the Book of David, chapter 4, verse 1. Found it?

April fool! There is no Book of David, you ignorant Philistines! Anyhoo. In 1 Samuel we find that Goliath's height "was six cubits and a span. And he had an helmet of brass upon his head, and he was armed with a coat of mail; and the weight of the coat was five thousand shekels of brass. And the staff of his spear was like a weaver's beam; and his spear's head weighed six hundred shekels of iron: and one bearing a shield went before him." Whew!

A quick bit of research reveals the helpful nuggets that a cubit was about 18 inches, and a span half that length, while a shekel was roughly equivalent to half an ounce in today's weight. Armed with this crucial info, all we need do now is calculate. Lessee... Carry the one... Divide by the sixteen ozzes that are in a lib... Reciprocate the renumerator... Gads, I'm glad I took all those helpful maths courses.

Basically, we find that Goliath Numero Uno was nine feet, nine inches tall, his coat weighed about 155 pounds, and his spearhead was about 20 pounds. All of which leads us to the important question of why he didn't carry his own damn shield, if he was so tough. Anyway, the good doctor can grow much bigger than nine feet. I'm not too sure on the specifics, as poor Black Goliath is a neglected character not only on the pages of comics themselves, but on the Web as well, but I'm fairly sure that he can grow at least twenty feet. Seems to me that even without a slingshot and a push from the hand of God, Dr. Foster could hand the relative titch Goliath a sound whuppin' in short order. Short order! Har! I made a pun! 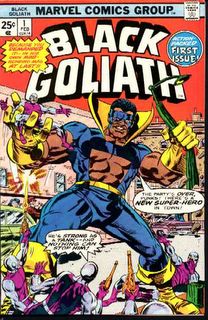 The party's over, punks. The Champ's in town.

Next: Holy androids, Batman!
Posted by Chance at 11:05 PM