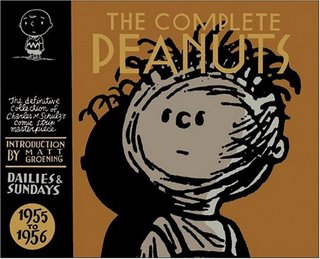 A few days back I checked out from the library the third volume of The Complete Peanuts. I read the first two a bit back; "the complete Peanuts" should be three words that gladden the heart of any true fan of comic art.

Volume three features every daily strip from January 1, 1955 to December 31, 1956, and has an introduction from Matt Groening.

I would not call this era Peanuts' peak by any stretch, which is a good thing, because that means we have many years worth of quality Schulz work to look forward to. However, the strip's once inchoate characters are really starting to gel here. Lucy is a bossy fussbudget, Linus starts to talk and show supreme skill in every childish task, and (to the delight of many) Snoopy begins to demonstrate his active fantasy life, becoming an alligator, kangaroo, snake, and Mickey Mouse, as well as debuting that terrific two-foot Snoopy dance. Oh, and a kite or two gets stuck in a tree.

To attempt to pick out favorite strips would be a foolhardy task, as I for one would probably end up transcribing about half of the book. Nearly every strip is a gem of cynical, poignant philosophy, the plaint of the insecure in a world that often seems crabby and cruel. Though all the characters are recognizable as real-world types, there's probably a little more Charlie Brown in all of us than we care to admit, and it's ol' round-head who provides most of the sobering chuckles. A brief smattering of punchlines demonstrates.

* Lucy marvelling that "Fun is good enjoyment!"
* Linus' rebuttal to the mundane dictates of life: "Five hundred years from now, who'll know the difference?"
* Charlie Brown: "The way the population is rising, I'm getting more unpopular every day!"
"I'm not even living... I'm just existing."
"I should have told her off! Oooo, how I should have told her off! I knew I was right, too! I just knew it! ...Yet, I wasn't quite sure..."

But Peanuts is not a treatise, it's a comic strip. The perfect, sad observations of Charlie Brown, Linus and company are nothing without Schulz' correspondingly perfect, clean line drawings. Humor is omnipresent, even if the words don't seem funny. With a twisted line, a wide eye, or an open mouth, Schulz somehow imbues his little cartoons with all the righteous anger, spirit-crushing resignation, and gleeful schadenfreude you could hope to find in any "adult" soap opera. The characters open their mouths impossibly wide and shout defiance or encouragement, literally bowling over their interlocutors. Snoopy's satisified, vaguely evil face after pretending, as a boa contrictor, to choke Charlie Brown, is priceless, but it's only one of thousands of similarly rich expressions. How Schulz manages to put so much glee into Snoopy's dancing with just a few motion lines and a goofy, wide grin is beyond me, but it's clear he was one of the real masters of hand drawing.

The bottom line is that there is more real, raw human drama in this year's worth of comics about "children" than in any year of those tired old "serious" serial strips like Mary Worth. There's more art --- honest to goodness, real creative endeavor --- in a single panel of Schulz' Peanuts than you could find in a decade of some soulless assembly-line fluff like Garfield. (And Schulz wrote and drew every strip, for as long as he lived, with his own hand.) And there's more genuine humor --- gentle, sympathetic mocking, gleeful, life-affirming whimsy, and crazy visuals --- in one strip than in a lifetime of empty, repetitive dreck like Marmaduke or Hagar the Horrible.

No, as you can tell, I am no fan of newspaper comics. Boring! But these Peanuts collections can stand proudly on any shelf.
Posted by Chance at 6:22 PM