We fight today to relive the Fourth of July!

Representing the U.S. of A. is the quondam 98-pound weakling Steve Rodgers, a.k.a. Captain America. You all know who he is. Super-soldier serum, vibranium-alloy shield, yadda yadda.

Representing the British Empire is Brian Braddock, under the startlingly original nom de heroisme Captain Britain. This guy has a little more of a convoluted origin and history. Seems he started as a normal human-level athlete, then wore a costume that increased his strength (he can lift two tons) and allowed him to fly at top speeds, then (possibly briefly) was granted (by Merlin) those powers sans accouterments. Finally, he was given a mystical amulet and what seems to be the original Excalibur, weapon of Arthur ap Uther the Pendragon. And oh yeah --- there's something about his powers decreasing the further away he gets from the white shores of old Albion. Perhaps, though, that no longer applies now that he has the mystical weaponry, or maybe it applies even more, since the weapons are so very British in provenenance. Whatever --- let's go with the flight and lifting two tons, and to perdition with the details, eh?

[Uatu the Watcher says: Spoilers of a recent issue of a certain comic follow.]

Now, in a recent issue of Captain America And Falcon, writer Priest has Cap getting shot by a twitchy junkie who was actually aiming at the Falcon. Some fans are up in arms about this, because Captain America is so super-great and all, that he could never be cut down by a stray bullet, and Priest is just a mean old jerk for even suggesting such a thing.

Priest has Cap dead in the last panel, but that's by the way: everyone knows that comic book deaths (except Bucky's, because no one remembers or cares about him by this point) are only for show, and if Cap really is actually dead here and not just trying to play some sick, twisted prank on his ol' buddy the Falcon, he'll pop back up good as new before the ink can dry on the Tribute to Captain America Special Black-Foil-Embossed Collector's Issue. No, I don't care about the "death" part, it's the actual hitting with a bullet that's the talking point here. How could the infallible Captain America get hit by a bullet from some frightened little junkie who wasn't even trying to hit him? How could Priest even imagine such a thing?

Well, folks, easy: people do get hit by stray bullets in gunfights. And since one of the main premises of Captain America is that he is a human, only a human in the most perfect, prime condition a human can be (and to be revered for being able to rise to such heights despite being only a human)... well, then, such a tragic accident could happen to him. What's the point of making such a goddam hoo-hah about him being a regular, non-superhuman trained athlete if he never gets wounded? Priest is right to explore the vulnerability and risks that non-powered superheroes take. You figure, hey, even Captain America gets sloppy, he gets used to having Iron Man and Thor watch his back all the time, turns a corner in a hallway one day, and blam! A few nine millimeter holes in the pretty blue chainmail. Makes you think, doesn't it?

And while we're (I mean I'm! Dammit! Why do I keep doing that?) discussing Captain America, could he please shut the hell up about the Nazis? I mean, to keep comparing the foes he fights to the Nazis --- it's a little old. "You're not so special! Try fighting the Wehrmacht, mister --- it gives you focus!" Little writing tip? In the Marvel Universe, the Nazis are the ones who should be deemed nothing special. Here is a world has been invaded by aliens more times than I can count, been threatened with gastro-intestinal annihilation at the hands of Galactus on at least a dozen occasions, and been shaken to its foundations by battles between gods, giants, and cosmic forces beyond our real-world mundane experiences. A bunch of racist nutters goosestepping around in thighboots in the '40s? Who gives a crap? There's an immense purple guy in a helmet that looks like a European electric plug threatening to eat the world! A little sense of perspective, Marvel denizens, please.

Oops, looks like I just went off on a demented rant. ...Oh, right, the fight. If there's anyone left still reading this, Captain Britain kicked Captain America's ass six ways to Sunday, shouting "That's for making Tony Blair Bush's lapdog!" Steve Rogers is only human, after all. 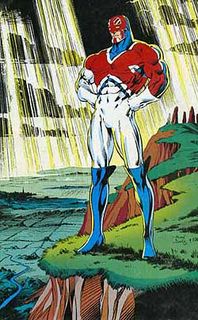 The Champ. "Did I really have to make him eat the shield? Oh well."