Who is the true Master of the Universe? Galactus? Jesus? He-Man? Grant Morrison? Today, we aim to find out in a COC fight that transcends mere planets and solar systems.

Representing the planet Braal, stalwart youth Rokk Krinn (seriously. Worst. Name. Ever), founding member of the Legion Of Super-Heroes known as Cosmic Boy, faces off against his opponent. The power at his command? "Super-magnetism." It's telekinesis that only works on magnetic metals. For this he's called Cosmic Boy?

Representing the Microverse but fighting out of his adopted home of the planet Earth is the non-entity known as Captain Universe. Actually not a person but a "Uni-Power," this force settles on Earthling hosts and grants them cosmic powers for a short period of time. What are these cosmic powers, I hear you cry? Easy. He's got a watch with a minute hand, millenium hand and an eon hand. And when they meet, it's a happy land. Just kidding. A little They Might Be Giants for you quirky pop fans out there.

Seriously, his powers. Well, they're sure not as cut and dry as "super-magnetism." As with the Silver Surfer and other "cosmic" entities, comic book writers have often confused high levels of power with the license to have a character do pretty much anything as needed. So the good Captain can fly, has amplified strength, molecular transformation and manipulation, energy manipulation and expulsion, and "Uni-Vision," which appellation, again, is a pretty big window for the writer seeking a quick way to get to the action: the Uni-Force grants hypnotism, telescopic vision, X-ray vision, microscopic vision, and for all I know visual prognostication --- whatever the writer needs to get Captain to the crime on time.

You'll agree, I'm sure, unless you're a real grouch, that this Captain Universe thing is a pretty grand idea. Consider: "at all times somewhere on Earth there is a Captain Universe." At all times! Twenty-four hours a day, someone on Earth has immense, almost god-like power, if not enough to reshape the world, then at least to make some pretty big changes. Think of the story possibilities! Theink of the grand, sweeping story arcs! Think of the delightfully ludicrous deus ex machina endings such an extant characteristic of the Marvel Universe could provide! (The Avengers, the Fantastic Four --- all incapacitated! The Masters of Evil are running amok! They're killing hostages! They're manhandling heroes' wives! They're stuffing mothers in refrigerators! No --- wait --- one of those elderly mothers suddenly is Captain Universe! Take that, Radioactive Man! Take that refrigerator up your ass!) And what do they do with this guy? They slap him onto Bruce Banner, Peter Parker, and Doctor Stephen Strange. Three guys who, you'll admit, don't really need or want any more weirdness in their lives.

Anyway. Captain Universe rules. I guess he (or she) could turn Cosmic Boy into mint jelly, or make the air around him for a ten-foot diameter solid rock. Or liquid gold. Or he could just rip Rokk's head clean off. Or hypnotize him into magnetizing a bunch of sharp, heavy metal things onto his own head. Whatever. Powerful man, Universe Man. They have a fight, Universe wins. 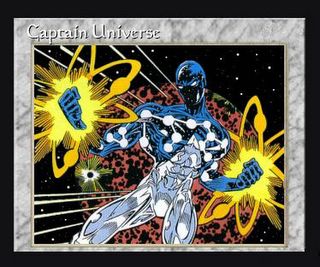 The Champ. Good night, Captain Universe, wherever you are.

Next: The iridescent tourney
Posted by Chance at 11:21 PM