Ah, archery. The sport of kings. Unless that's horse racing. Or poker.

Whatever, today's contest is between two titans of the bow. Created by rival comic companies, they are probably the two most famous archers in comics.

The first is a self-righteous left-winger with a goatee, a veritable amalgam of Noam Chomsky and Robin Hood: he's wealthy playboy Oliver Queen, known to the denizens of Star City as Green Arrow.

The second is another hothead who often rails against authority (and what is it with archers being such firebrands in comics?), Clint Barton, the other guy besides Alan Alda known as Hawkeye.

These purple- and green-clad warriors are absolute masters of their chosen weapon. With hours of grueling practice daily, and intensive combat experience under their quivers, each man can retrieve and notch an arrow faster than a sharpshooter can draw a gun; they can both plant their sturdy shafts (hee hee) at will into targets the size of quarters at distances of 200 feet and more without breaking a sweat. Each one will topple the quintain 99 times out of 100, and even that one percent of the time, they'll only miss by a hairsbreadth. Their hand speed and reflexes are also past Olympic-level; both Hawkeye and Green Arrow have deflected oncoming missiles with their own arrows in midflight. In terms of skill with the bow, these are two truly evenly matched heroes. In terms of strategy, Hawkeye may have a slight edge, since he's been the leader of a team, but it's a very slim advantage; indeed, GA's long stretches of solo adventuring would be more likely to serve him here, in a one-on-one bowfight.

What types of arrows await their disposal? Both heroes use an extensive array of trick arrows. Gas arrows, TNT arrows, net arrows, electric arrows, magnetic arrows, bolo arrows, boomerang arrows, even (ugh) boxing-glove arrows have been drawn and fired by these intrepid bowmen. (It's all a bit goofy, but hey, that's comics for ya.) How could anyone reasonably judge a contest between the two? Surely it would come down to a moment's blind luck --- one missed step, the glint of the sun in one combatant's eyes, that one dud glue arrow that fails to activate. (Isn't it always the way? You prime the glue arrows, you practice with the glue arrows, and when you most need them, they fail to spew glue all over your opponent.)

There's no way to write a fair, balanced account of an encounter between these two athletes. Admiring both men's dedication, strength, willpower and sheer four-color creativity, one might make COC history and call it a tie. Or, one could make snarky comments about Hawkeye's ludicrous costume changes over the years.

The purple mainstay outfit is bad enough (the pointy eye/ear things on his cowl aren't the best idea for an archer --- don't they obstruct his vision?), but look at what sartorial travesties he's unleashed on his fellow Avengers during his career. Wasp's got nothing on him. What leaps to the offended eye immediately is that midriff-baring gay-stripper ensemble from his Goliath phase. Note there's just one "tough-guy" wristband, on the right wrist --- is that the superhero equivalent of a handkerchief in a certain pocket, some sort of signal of what he will and won't do in bed? What would two wristbands on the right mean? And I don't get the rationale behind the "cover your shoulders, but leave the arms and torso bare," unless it's for sheer titillation. Which is always good when your life depends partly on your ability to intimidate. Oh Lord, and then there's the distastrous Age-Of-Aquarius-meets-an-extra-from-Troy experiment, with the shirt open to the navel, as if leading the viewer's unbelieving eye down a seductive silk road to the all-too-brief "tunic" (which seems actually to be a skirt of some kind) below. That must have been a real nadir in Clint's life.

Is this a man who can take down the Green Arrow? I say thee nay! 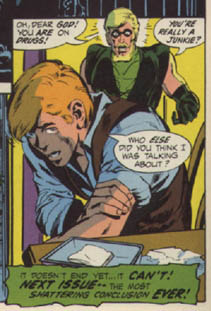 No one is champ when your ward's a junkie.

Green Arrow For the win