Today we have two Canadian mutants slugging it out. One is a brash, impudent, arrogant, and might I add, if that weren't enough, a French-speaking and homosexual speedster, Jean-Paul Baubier, Northstar. The other is a short, hairy, macho-to-the-point-of-savage, English-speaking Canadian. You know him, even if you don't read comics. "I got claws, I can use 'em! Bub!" He looks great for a guy about a hundred years old, his real name ain't Logan, and he'll gut ya as soon as look at ya. Bub. Yes, it's that regenerating rodent... Wolverine!

(Actually, Wolverines are actually of the order Carnivora, not Rodentia. But dammit, the poet in me will sacrifice scienterrific accuracy for aurally aesthetic alliteration everytime.)

This is a timely COC fight. Why? Because in a recent [NB: this post was originally written in March '05] issue of one of the approximately 75 titles in the X-Men family, a writer called Mark Millar has Wolverine kill Northstar. This riles my hackles, or something. First off, I think Millar killed Northstar because he's a gay character, and thus he thought it would be edgy or controversial or something. I'm not going to wax political here --- that ain't my self-appointed job --- so I'll let this guy do it.

Second, it's not true to the characters' profiles. What I'm going to do is, I'm going to retell the fight as it should have happened, if comics fans and writers weren't such slavering fanboys with hard-ons for "bad" mofos like Wolverine. This fight will go according to the fictional perameters of the scene.

Picture it: first passing harmlessly through a phased Kitty Pryde, a crazed Wolverine leaps, claws extended, at Northstar, whose back is against a tree. Northstar is, of course, a speedster. Noticing a crazed, hairy, short mutant leaping at him with the relative agilty which you or I might note in a toddler advancing toward us, Jean-Paul takes to the air and lingers there, a few feet over Wolvie's head, as the tree is pierced to its poor arboreal heart by Wolvie's admantium claws.

At being so foiled, the Canucklehead explodes into an beserker rage no less impotent for all its fury, shredding the tree to scraps of bark and kindling while screaming up at Northstar something like "Damn faggot gonna ride the Claw Train all the way to Death City on Route Snikkety-Snikt!" With a few "bubs" and "that's what I do bests" thrown in, of course. [Apologies to Garth Ennis, whose Wolverine speech pattern I have appropriated and abused.]

Northstar takes off toward the nearest town and appropriates from various houses and sheds about half a dozen implements such as axes, tire irons, crowbars and the like.

He returns to find Wolverine in mid-leap, mid-swing and mid-epithet, trying to reach where Northstar was: "---ggot!"

Jean-Paul proceeds to ruin every implement he brought by beating Wolverine with them. Hitting the soft, fleshy parts (ear, throat, nose, eyes) at a hundred strikes a second, he soon has Wolveringe bloody, blind and baffled, if not broken and beaten. Easily avoiding the shorter mutant's wide haymakers (even a man as quick as Logan may as well be swimming in Jell-O compared to Northstar), he lifts Logan up, far up into the air, in the space of less than a second --- then drops him.

Result? One Wolverine, if not mangled, then at least one in no shape to be doing anything he does best. 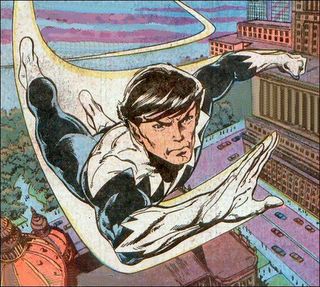 And remember, the Champ always gets the girl. Or guy. Or killed.

Next: An ass with a jawbone
Posted by Chance at 6:42 PM