Calvin's dad is a monster

Despite many years of reading and admiring Bill Watterson's brilliant "Calvin & Hobbes," I never before noticed that the people in his universe have three fat Mickey Mouse fingers on each hand! 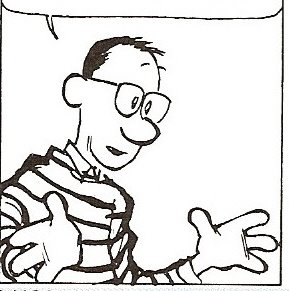 I'll never be able to look at this strip in the same way again.

Seriously, as odd as it sounds, this was kind of startling to me. Watterson's such a brilliant cartoonist, with a sparse, sketchy kind of style, but yet filling an elaborate, detailed world, that this perfectly normal cartoon convention looks, to me, askew when viewed within his panels. There's something not quite right about it, like when Homer became 3-D.

Or perhaps I've just been studying too hard.
Posted by Chance at 12:07 AM

I'm having the same problem. I have to retest to recertify for PA, which means a lot of studying with reduced brain power. The baby is sucking the brains right out of me. My husband says I've gone stupid. That's definitely encouraging.