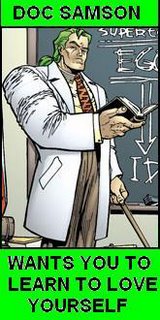 I added comics blogger Dorian to my sidebar. His was the very first comics blog I discovered and remains a favorite. Above is my contribution to his Meme Despite Itself, which has become The Meme That Would Not Die.

Today, I went to my favorite comic shop and bought a few things. Now, two of my New Year's resolutions were to cut back on buying CDs and graphic novels. It's not like I was going into debt mainlining comics or anything, but I always think stepping back and counseling moderation to oneself is a good idea. As January ends, I can say that I have bought zero CDs, and spent (until today) only fifteen bucks on three quality graphic novels. Today, I bought a few gifts for the daughter of Joy, my former co-worker, whose birthday party I went to later. For myself, I got two massive hardback volumes of the Complete Strangers In Paradise collections (never read this before; I hear enough good and bad that I'm intrigued, and anyway I'm a sucker for these relationship dramas) and two hardcover volumes of The Towers of Bois-Maury by Belgian artist Hermann. All four set me back a mere $20 in total. Now that's a sale!

I have started work on the Friar's band posters. I'm liking the result, although I'm well aware of my limitations as a simple (and honestly, not exceptionally talented) pen-and-ink artist with a rough, cartoony style. It feels very good to be creating again, to be engaged in an artistic activity. I was so fired up, I drove with the posters to the Hangout --- where I met Friar, Anacreon and his wife and some girl Friar knows from out of town --- and showed them to him. I also called Spookytooth, and she came out, so we played a round of video bowling and talked a bit. She and Friar independently have been telling me how great teachers in the Catholic diocese have it, with high pay, great benefits, vacation and short hours. Not to mention a lot of help in the classroom, more respect, high academic standards, and they may even help pay for certification. To hell with the Job; I'm going to ask these two to use every connection they have to get me in there.
Posted by Chance at 1:51 PM

Strangers in Paradise is pretty good reading, especially in chunks. Have fun.